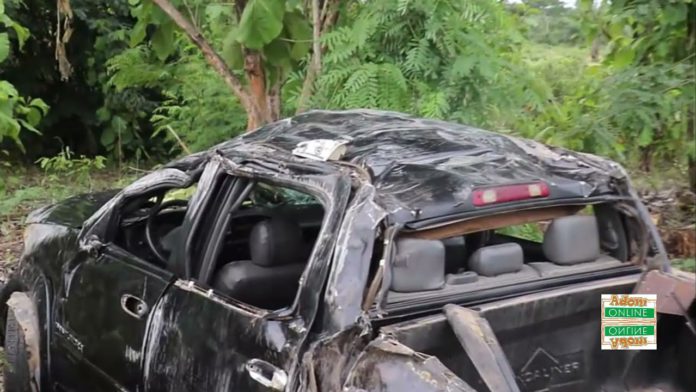 One person has been confirmed dead with 10 others seriously injured after several cars jammed between Worawora and Tapa Abotoase in the Oti Region last Friday, June 18, 2021.

According to a witness, Bernard Yaw Ofori, who was also a victim in the accident, one driver, who was speeding, overtook his taxi car but unfortunately, he missed control of the steering wheel thereby smashing a Toyota Tundra car that was ahead of him.

The Tundra also somersaulted and slammed several other cars that were before him which caused many to be injured with one Mr Edem, losing his life after the sad incident.

Most of the victims, who were on their way to a funeral with a convoy, had to be rushed to the Worawora Government Hospital where they have since been receiving treatment.

Others were also transferred to the Ho Government Hospital since their injuries were serious.

Another victim, who was also a witness, Muabela Tolar, said his welder friend, Mr Edem, died after the car somersaulted more than three times.

Mr Herver said the victims were in a bad condition when they arrived at the emergency ward of the hospital.

He also pleaded with the government to supply the hospital with emergency kits, adding that, they will need another emergency ward since the old one has been reserved for Covid-19-related cases only.