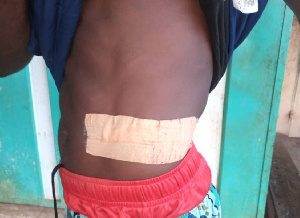 The security volunteer was stabbed by an 11-year-old boy

A 30-year-old security volunteer man Kwadwo Ayem has been attacked and butchered by an 11-year-old boy identified as Aboude3 at Kokode in the Kwadaso Municipality of the Ashanti Region.

According to reports in the local media, the victim Kwadwo Ayem was attacked in a broad daylight by Aboude3 and his gang over his role as a security volunteer in the community which is hampering their work as criminals.

The victim Kwadwo Ayem narrating the unfortunate incident in an interview with Pure FM’s Osei Kwadwo said “the robbers have threatened me on several occasions because I’m making them uncomfortable. I went to town around 1 pm to buy food at Kokode and they approached me with knives and other weapons.

They attacked me and later one of them went home and brought Cutlass. I was butchered and beaten severely” he explained.

Meanwhile, the Assembly Member for Kokode Electoral Area Hon Wilson Sackey complained bitterly about the rising insecurity in the area.

According to him “We have recorded cases of slaughter and robbery within this year. The robbers are tormenting our lives”.

“They are young boys and their age ranges from 11 to 26 years but they are very deadly. They have guns and other weapons and with the little mistake, they will either butcher you or murder you” he explained.

He, therefore, expressed his gratitude to Sofoline Police Command for their quick response and ability to combat crime in the Kokode Community.

GSE extends deadline for submission of 2020 financial report of listed...