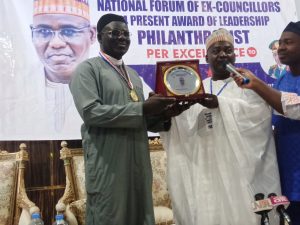 He said the call was premised on the achievements of President Muhammadu Buhari’s administration in different fronts, adding that there was need for continuity to make Nigeria great.

Buratai said the recent discovery and commitment of drilling of oil in the North East and redesigning of the Naira notes were some of the commendable achievements of the administration.

He said there was need to have the right leadership that would continue with the transformational legacy of Bubari’s administration, adding that the administration had also done well in the area of infrastructure and security.

“This is a political season. The time for nominations and other pre-election activities have been conducted and now is time for campaign and I know you come from different political parties, not a single party.

“But you know where the country is heading to, you know what President Buhari has done for this country, especially the successes we have achieved from 2015 to date.

“The President has been instrumental to the strong leadership and his commitment and the will to see that the country is secured, free from corruption and also develop and progress in terms of its economic development.”

According to him, the political terrain is still very much dynamic and as such, we ensure that we have the right people in leadership to be able to come into power and get our country the better footing as we grow.

“Well, you know my standing. President Buhari who has been a great mentor, who has brought me to limelight, belongs to a particular party, the APC.

“So, I will not shy away from saying that that is the party to go and I believe things will be better for the foundation that Buhari has laid and will be sustained.

“We have received assurances from Tinubu. So by and large, I believe Nigeria has a great future and will do a lot to ensure that we continue to support the present government and the next government that will be coming.

“For now, we have a course as we move to the 2023 general elections to get the right party, the right candidates for them to be in power, that will be a continuation of what the President has left,” he said.

The former army chief and ambassador thanked the forum for recognising his efforts while in service and pledged to continue to support the vulnerable and the less privileged in the society.

He said that a lot had been done to uplift the living conditions of people at the grassroots and still continuing, saying the award was a true reflection of what Buratai is and what he stood for.

According to him, It is a great honor to him and his family and to the military in general, including the defence correspondents that were with him in the fields as army chief.

He urged the current military leadership to sustain the current successes being recorded in taming the security challenges, to ensure that Buhari handed over a secured Nigeria in 2023.

The President of the forum, Mr Awwal Hassan said it was the first time they would be giving out such award to a former service chief, adding that Buratai earned the award because of his achievements in office, leading the counter-insurgency war from the front.

Hassan said the former COAS also stood out among his contemporaries in the area of philanthropy for helping a lot of vulnerable people in the society in the area of empowerment and education support.

The Vice President of the forum, Mr Ismaila Mumin said the forum of ex-councilors is a non-governmental organisation floated and organised by some concerned youth activists to foster unity in diversity and cordial understanding among the teaming youth in the country.

He said the organisation has vibrant and functional structures in the 774 local government areas of Nigeria to sensitise and mobilise the youth to promote peace and peaceful co- existence in their respective areas among others.

He said the governing body of the forum decided to give the prestigious award of Excellence as philanthropist per excellence for 2022 to Butatai on the basis of his many records of achievements.

“Our decision in this respect is in line with the teaching in our national anthem that the efforts of our heroes should not be allowed to go in vain,” he said.

He urged Buratai to be ready to vie for political office in future, saying the nation was in need of his experience and patriotism.