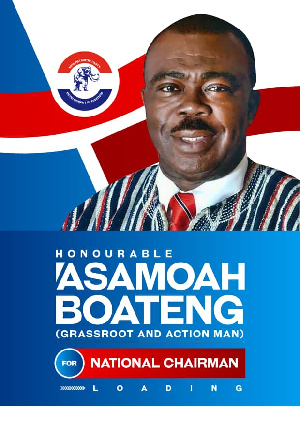 Posters of a leading member of the New Patriotic Party (NPP) Asamoah Boateng vying for the Chairmanship slot of the party has surfaced on social media.

The posters which have since gone viral on several platforms have tagged Asamoah Boateng as an action and a grassroots man who will transform the fortunes of the political party.

These posters come at a time several persons including the former Minister of Education under the erstwhile Kufuor administration Prof. Ameyaw Akumfi have expressed interest in leading the NPP.

The governing party yet to open for nominations but a number of people have expressed interest in vying for various positions in the political party.

Stephen Asamoah Boateng is a Ghanaian politician and a former member of parliament for the Mfantsiman West constituency of the Central region of Ghana. He is a former Minister for Local Government Rural Development and Environment, Tourism and Diaspora Relations.

He was appointed by President Nana Addo Dankwa Akufo-Addo as the executive chairman of the State Enterprise Committee in 2017. Boateng was later appointed as the director-general of the state interest And Governance (SIGA) Committee by the same president.

Federation to Defend the Rights of Children launched [Video]