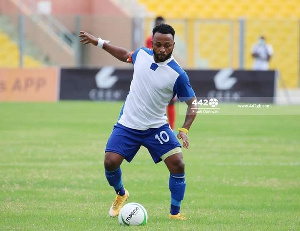 In-form playmaker Gladson Awako has put Dreams FC and Hearts of Oak on red alert after bidding farewell to Great Olympics and their fans.

The sensational midfielder whose stupendous performance in the Ghana Premier League has swept through the league like bush fire in the harmattan has been linked to a move to either Dreams FC or Hearts of Oak.

Dreams FC have tabled an official bid for the former TP Mazembe midfielder who is reported to be a long term target of Accra Hearts of Oak.

Great Olympics in a response to Hearts of Oak’s request for the talismanic Awako have proposed a price tag of $250k, Patrick Razak and a goalkeeper in exchange.

With Dreams FC tabling a last-minute bid for Awako, the tussle for his signature has been heightened as the Phobians are determined to make him their biggest signing.

Following these developments, Awako has given a massive indication of his readiness to bid farewell to the Dade Boys putting Hearts of Oak and Dreams FC on red alert.

In a recent post on his Twitter Handle, the U20 World Cup winner has already bid farewell to the Blue and Whites giving strong indications of his readiness to depart.

With Awako blowing indications of leaving Olympics, the battle for his signature between Dreams FC and Hearts of Oak is set to take a dramatic turn.

READ  If the kitchen is too hot for you, feel free to leave

Great Olympics look like cashing in on the sensational star who has up to June to see his contract running out with them.

Following his brilliant rise in form, the Wonder Club see it as an opportunity to make money from his transfer instead of seeing g to the end of his contract.

Issue of being a Cabinet minister superfluous – Western Regional Minister

How Ghana Won 4 AFCON Trophies Under The Auspices Of Dr....