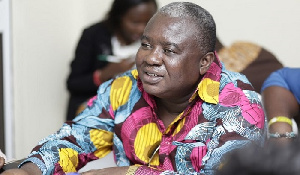 Veteran music producer and entertainment pundit Fred Kyei Mensah has admonished successful artistes to give upcomers the platform to perform whenever they get deals to perform at events.

According to the veteran music producer, that is how they can help talented upcoming artistes.

He made the comment on Power Entertainment on Power 97.9 FM Saturday when gospel musician Akesse Brempong had come there for an interview.

The pundits in the show who agreed with Kyei Mensah noted that, it was the surest way to build upcoming artistes.

Kyei Mensah also known as Fredima said “Every time I say, whenever there’s a concert, give them the platform to also perform. In case you guys are no longer around they could take over.”

Nevertheless, Fred says he’s been preaching about this and people have taken it serious and started giving the young ones opportunity.

“The issue, ever since I started preaching it, people have taken it serious and have started giving the young ones the chance in terms of space ”

‘Na Today’ music video is the most expensive video ever released...

‘Fixing The Country & It Will Automatically Fix The People’

Our boat is unsinkable – Victoria Lebene stands by husband despite...