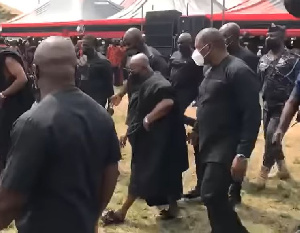 Social Commentator, Bernard Allotey Jacobs says the President is not to blame for the incident that happened at the late politician and lawyer, Kwadwo Owusu Afriyie’s funeral held in the Ashanti Region last week.

The late Kwadwo Owusu Afriyie, popularly called Sir John’s funeral has dominated the airwaves after a mammoth crowd of mourners and sympathizers including President of the Republic, Nana Akufo-Addo and Vice President Dr. Mahamudu Bawumia together with members of the opposition parties thronged the funeral ground to pay their last respect to the deceased.

One could say Sir John’s funeral was successful looking at the numbers that showed up to mourn with his family but it has however generated controversies because a large number of the attendants were spotted not wearing nose masks or following the Coronavirus safety protocols.

Due to this, the President has been asked to apologize to Ghanaians.

But, according to Allotey Jacobs, what happened at Sir John’s funeral, although unfortunate, was unavoidable.

He argued that there was nothing the President could have done about the crowd.

“Moreso, the very people who are criticizing the President, their leadership were there. That’s why I’m saying, at the end of the day, who are you to blame? As the President of the Republic, he has no hands. He is the Chief mourner. He has no hand in the organization of the funeral,” he held.

To him, the blame should be laid on the doorsteps of the attendees because they knew the right thing to do but chose to do otherwise.

”Yes, it was unfortunate but it was unavoidable . . . it was an unfortunate incident but you cannot help it and don’t do politics with it by directing it to the President. You, who went there, if you contract COVID; it’s your own issue. I will blame the very people who went there including the political leadership.”

‘I watched my son burn into ashes’ – Distraught mother recounts