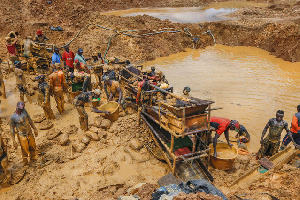 File photo of a galamsay site

Development Consultant, Kwame Okyere Darko has questioned the government’s decision to burn excavators seized from illegal miners in its fight against galamsey.

He believes the move is wrong and these excavators could have been re-purposed for the good of the nation. He, however, claims the President is taking this drastic measure because he doubts his men.

“The burning of these excavators clearly proves the President does not trust the men he is working with. President Akufo-Addo doesn’t trust his men and because he fears these excavators will vanish again, he has given the explicit directive for them to be burned”, he claimed.

Kwame Okyere Darko indicated that these excavators could have been given to Assemblies for regular dredging exercises or used to dig septic tanks for basic schools but that is not the case presently. “The slogan of ‘we have the men’ is no more because the President does not have the capable men. President Akufo-Addo doesn’t trust his men anymore”, he stated.

During the President’s efforts to fight galamsey in his first term of office, it emerged that mining machinery including excavators, which were seized by the Operation Vanguard Task-force had disappeared.

This came to light when the Minister for Environment, Science, Technology & Innovation and Chairperson for the Inter-Ministerial Committee on Illegal Mining (IMCIM), Professor Kwabena Frimpong-Boateng made an official complaint to the police for investigation.

This investigation led to some revelations where some leading members of the NPP were said to have sold or re-purposed the excavators for personal use.

In a renewed effort to fight the menace, the President in his second term of office has deployed about 200 soldiers to mining areas to clamp down on activities by illegal miners.

This time around, the Defence Minister, Dominic Nitiwul disclosed all seized galamsey equipment including excavators will be destroyed on site by the military officers.

Godfred Dame before Parliament to answer questions on unresolved murders

Family of deceased woman tells how she caught a ‘stray’ bullet

Watch highlights as Legon Cities come from behind to beat Liberty...