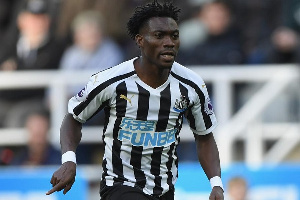 Ghana international, Christian Atsu has revealed that he turned down a move to Celtic in the January transfer window because of short notice.

The winger last season spent the campaign on the sidelines after his manager at Newcastle United decided not to register him for the 2020/2021 English Premier League.

Although he was later expected to move in January after links with a number of clubs including Celtic, Christian Atsu later opted to stay put.

Revealing more info on why he decided not to move, the pacey attacker says he had to put his family first.

“Five hours before the window closed, they asked me to go to another club.

“The club knew my position, why I’d stayed. With five hours’ notice, that was never going to change. It was impossible to make that decision. My family comes first,” Christian Atsu told The Athletic in an interview.

Currently a free agent after leaving Newcastle United, Christian Atsu is keen on securing a move this summer before the 2021/2022 football season begins.