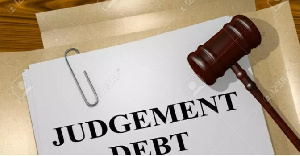 The probe is as a result of a petition by ASEPA

The probe is as a result of a petition by the Alliance for Social Equity and Public Accountability (ASEPA).

ASEPA three weeks ago petitioned the CID to probe circumstances leading to the termination of the Ghana Power Generation Company (GPGC) emergency power deal, which has cost the a judgement debt of $170 million.

In the same petition, ASEPA wants the CID to also probe some government officials including the Attorney General, Godfred Yeboah Dame for what they termed as conspiracy to defraud the state and negligence.

On Thursday, July 22, the executive director of ASEPA, Mensa Thompson was back at the CID headquarters after an invitation was extended to him to furnish the investigating body with additional information.

After barely three hours of close door engagement, Mensah Thompson was out to speak to tv3.

He maintained circumstances leading to the 170 million dollar judgement debt to deplete the national purse must be given full attention.

He said ASEPA will also wade into any other judgement debt awarded under the current administration.

A London-based United Nations Commission on International Trade Law tribunal has ordered the government of Ghana to pay a contractually defined “early termination payment” of more than US$134.3 million plus interest and costs.

This follows the termination of the contract between the government of Ghana and an independent power producer, Ghana Power Generation Company (GPGC) in 2018.

The judgment debt resulted in accusations and counter accusations among officials of the Mahama administration and the Akufo-Addo-led government.

A former Minister of Power, Dr Kwabena Donkor, has said the emergency power agreement went to cabinet and parliament for approval.

He told Dzifa Bampoh on the First Take on 3FM Wednesday, June 23 that the agreement met all the constitutional requirements hence the $170million judgement awarded against the government of Ghana for the termination.

Mr Donkor was reacting to a comment by Attorney General Godfred Dame that the decision by the signatories to sign such an agreement was uninformed.

Gofred Dame had said in relation to the judgement debt that “The fundamental question that we asked is why the agreement was entered into in the first place? Why did John Jinapor and his former boss execute the signatory of this agreement and afterwards set up a committee to review those agreements?

“It is because you yourself had realised that this was going to result in excess capacity.”

“Indeed, the cost was very, very monumental. As per the report of the PPA Committee, if all the agreements signed by John Jinapor and his former boss had been allowed to run, each year, the nation was going to be exposed to payment to the sum of $586 million.”

Reacting to his comments, Dr Kwabena Donkor, who is lawmaker for Pru East told Dzifa that “The awards was given for wrongful termination, not for wrongful signing. I am therefore surprised that the Attorney General does not deem it fit to confirm that whoever terminated will also be referred to the CID.

“The Ghana Power Generation Company (GPGC) was sent to cabinet, it had cabinet approval. Indeed, the Secretary to Cabinet wrote to Parliament on the 3rd of July 2015, and parliament approved the agreement…It went through the constitutional process set out for these agreements.”

“This agreement had the lowest tariffs of all the emergency power purchasing agreements. It had the shortest duration, four years and that agreement did not require any financial security from the state of Ghana and therefore it was one of the agreements negotiated,” he added.