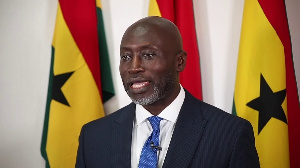 The 2020 Independent Presidential candidate, Mr. Kofi Koranteng has called for the immediate closure of the Police Hospital in Accra.

He has described the facility as substandard because it has no modern logistics or hospital equipment for proper health care delivery in the country.

His comments come at the back of no hospital beds syndrome that has hit the facility as well as the lackadaisical attitude of the health workers.

Kofi koranteng made the call when speaking on ‘Maakye’ show on Onua TV on Tuesday July, 20 and reiterated the call for the facility to be shut down stressing that the hospital is not fit for the purpose.

He is livid at the unhealthy atmosphere of the facility and the fact that the hospital authorities are insensitive and unable to keep the environment clean to fast-track the recovery of patients in promoting proper healthcare.

He wondered whether or not the Inspector General of Police (IGP) James Oppong-Boanuh is privy to the poor condition at the hospital which is predominantly responsible for the health care of the police service.

Kofi Koranteng has thus vowed strongly not to take any of his relatives to the facility to receive medical attention, not even his worst enemy.

“I won’t take my worst enemy to the police hospital, no it won’t happen and I sturdily believe that it should be shut down.”

He wondered how the staff and the health workers were recruited and migrated to the government payroll.

Kofi Koranteng has thus appealed to the government to close the facility with immediate effect as well as terminating the contract of the health workers on the bases of incompetency and paltry attitude towards patients.

Lady Tattoos John Mahama’s Face On Her Skin As She Campaigns...