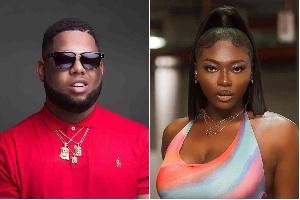 ‘E Choke’ hitmaker Sefa, has cleared the air and debunked several dating rumours that has been going on for some time with her boss, D-Black.

The Ghanaian perception and assumption about female artistes dating their managers or bosses has been there since Adam hence not surprising, Sefa is facing such rumours.

However, in a recent interview on Pulse Ghana, Sefa cleared this rumour saying she has nothing to do with her boss, D-Black the CEO of Black Avenue Music.

She said she’s not D-Black’s type and neither is D-Black her spec, hence the two have nothing going on as assumed by many.

Sefa said, “We are grown and matured and I always say, we can have something to do with each other but I always say he is not my spec and I am not his spec and that is what people don’t understand.”

Asked if she was seeing someone else, the Black Avenue signee said, “I don’t have a boyfriend.”

“I just think that it’s sad because there fact that someone believes in me and my talent and wants to invest in me does not mean that the person is pipping me or smoking dripping me,” Sefa stated.