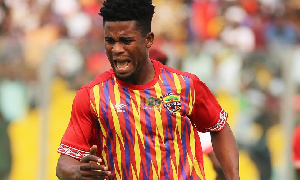 Hearts of Oak forward Daniel Afriyie Barnieh is confident about his side winning double at the end of the 2020/21 season.

The Phobians have been outstanding this season and are in contention to win both the league title and the MTN FA Cup.

However, Barnieh who guided the U-20 team to the AFCON triumph in March called on the fans to rally behind them and is confident they will never disappoint.

“I will plead with the fans to continue supporting us because we are winning double for them. We will never disappoint so they should keep on praying and support us” he said.

Hearts of Oak are tied on 50 points with sworn-rivals Asante Kotoko after matchday 28 of the league.

They will play host to Medeama in week 29 of the GPL.

17 Young Men Die In Fatal Motor Accident While Returning From...

I will Never Apologise To Prof. Jane Opoku – Agyemang...