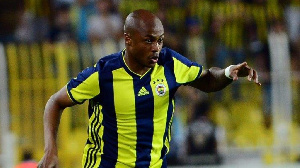 Turkish side Fenerbache has joined the race to sign Ghana forward Andre Dede Ayew in the ongoing transfer window.

The Black Stars captain left Swansea City at the end of the season following the expiration of his contract.

Ayew who played for Fenerbache on loan in the 2018-19 season, scoring five goals in the process is wanted by the club according to reports in Turkey.

He made 29 appearances for the Turkish side but was unable to seal a permanent deal at the end of that season.

The 32-year-old has been impressive for Swansea City after his loan deal with Fenerbache in the past two seasons.

However, he failed to qualify the Welsh side to the English top-flight after suffering two consecutive defeats in the Championship play-offs.

Ayew has received several offers from clubs in England, Spain, France but the Ghana International says he wants to make the right decision.

“I feel like I have what it takes to play in top leagues like England, France or Italy. I haven’t made any decisions at the moment. I’m also getting offers from Gulf countries and Asia.

“So I don’t have to rush. The decision I make will affect not only me but also my national team, so I have to make the right decision. I will take the time to discuss all the offers.”

According to reports in England, Crystal Palace are interested in signing the Ghana International.

It’s time to speak to our challenges