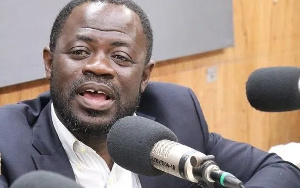 Chairman for the NPP in New Juaben North, Kwadwo Boateng-Agyemang

The Chairman for New Juaben North Constituency of the New Patriotic Party (NPP), Kwadwo Boateng-Agyemang has said Ghanaians are still talking about the First Lady’s salary “because the people do not have any problem.”

He was of the view that the salary or allowances of the First and Second ladies should have been left for the Prof. Yaa Ntiamoah-​Baidu led committee to decide instead of a public debate.

The First Lady declined the offer for her to be paid allowances and as well decided to refund all monies paid to her as allowances from the date of the President’s assumption of office, i.e., from January 2017 to date, amounting to GH¢899,097.84.

Her decision was informed by some extremely negative opinions being expressed by some Ghanaians in the raging debate on emoluments for First and Second Ladies.

The First Lady’s emoluments was recommended by the Prof Yaa Ntiamoa-Baidu-led Presidential Committee on Emoluments for Article 71 officeholders.

Speaking on Atinka TV’s morning show, ‘Ghana Nie’ with Ekourba Gyasi Simpremu, Chairman Boateng said, “If we had problems, this conversation wouldn’t be a topic of discussion.”

He added that, “The opposition is making noise because they realised that we don’t have problem in Ghana so when something happens they should make noise about it.”

Police on manhunt for killers of 34-year-old gym instructor