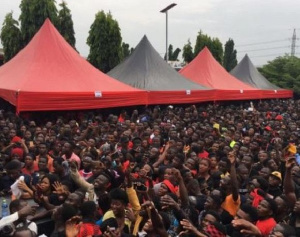 The crowd at Sir John’s funeral

• GhanaWeb highlights instances where the protocols have been disregarded

When news broke that Boris Johnson was not going to be present at the funeral of Prince Charles, eyebrows were raised, particularly from this part of the world where such events are held in high esteem.

It was also a show how far the leadership of that United Kingdom were willing to go to set examples of how they are committed to respecting the measures advised by their health experts on controlling the spread of the Coronavirus.

Flip it to Ghana and while the message from leadership has been similar to that of the United Kingdom, their actions have been completely different.

A standout instance where government set a good example in adhering to the protocols was the decision to hold this year’s national independence anniversary largely virtually.

Preceding and after that, however; the president, his appointees, some members of the opposition and general public had misconducted themselves relative disrespecting Coronavirus protocols.

See also  Fight against galamsey: burning of excavators not an act of illegality

Pictures and videos from most campaign grounds during the 2020 general elections made people question if the Coronavirus indeed existed.

Campaign grounds of both the ruling New Patriotic Party and the main opposition National Democratic Congress had thousands of enthusiastic supporters who did not give a hoot about the potential danger they faced.

On the night of the declarations the presidential tickets, the residences of both John Dramani Mahama and Nana Addo Dankwa Akufo-Addo and the offices of both the NDC and NPP were besieged by supporters, who again care very little about virus protocols.

But according to Information Minister Oppong Nkrumah, the campaign period strangely did not become grounds for the spread of the virus.

His assertions were rubbished by some health experts who pointed to the spike in cases early this year as a consequence of the election and holiday period disregard for protocols.

Chiefs and people of Akyem demonstrate against Mahama

This was a major event that marked the pre-election period. This protest was triggered after John Dramani Mahama had referred to some people he perceived to be draining the public purse as forming a cabal which he named ‘Akyem Sakawa mafia.’

See also  I am ready to assist CK Akonnor

His comments in the wisdom of the youth and chiefs of Akyem – where the president hails – were ethnocentric and denigrating. He was subsequently asked to apologise which he refused, resulting in the big demonstration in September against him.

Remember, COVID-19 was still around and there was ab ban on public gathering.

The leader of Christ Embassy, Pastor Chris Oyakhilome and his people may not believe in the existence of COVID-19 but their position on the virus should not come at the cost of public safety.

That is why when they defied the imposition on public gathering act and massed up in their thousands at the Fantasy Dome in Accra, the Ghana Police Service arrested three of the organizers and the person who handles the facility.

Pictures from the event saw over thousand souls receiving their anointing while threatening the safety of the general public as they practiced no social distancing and care little about other virus protocols like wearing masks.

A major trending issue in the last few days has been the funeral of Kwadwo Owusu Afriyie popularly known as Sir John . The fears people had that the body was being kept in the morgue in anticipation of a huge funeral were confirmed last Thursday when thousands of persons stormed Sakora Wonoo to pay their last respect to the former Forestry Commission CEO.

The President, Nana Addo Dankwa Akufo-Addo, his vice Mahamudu Bawumia, his Attorney General and the Chief Justice were all there and witnessed the brazen disregard for the protocols imposed by the president.

Vice President Bawumia according to Kwabena Atta Mikandoh of the NDC turned the event into a political rally and waved to his supporters.

The Ghana Medical Association, GMA; OccupyGhana and some Civil Society Organizations are angry and demanding answers from the government. The GMA wants the IGP to arrest the organizers and to pursue prosecution.

Great Olympics vs Hearts of Oak

A key presidential directive for the return of the Ghana Premier League was that venues will be allowed to take only 25% of capacity.

This particular protocol has been breached a couple of times since the league resumed but on Sunday, it reached another level.

Hundreds of football lovers dancing and chanting with no nose masks massed behind the Accra Sports stadium, demanding to enter the venue. When matters became heated, some of them even broke the stadium gate and rushed into the venue. These are public breaches of the Coronavirus protocols at a time when the country is grappling with vaccination efforts. Hopefully the fears that a spike will overwhelm the public health system doesn’t become a reality.

Federation to Defend the Rights of Children launched [Video]