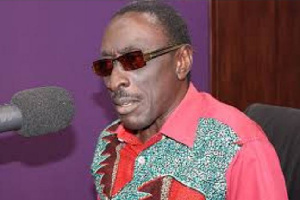 TV personality and satirist Kwaku Sintim-Misa (KSM) has tasked the Akufo-Addo-led government to as a matter of urgency work around to fix pertinent problems Ghanaians are facing.

The renowned broadcaster believes it is the responsibility of the president to fix the challenges Ghanaians have pointed out to him and his appointees, saying the campaigners of the #FixtheCountry on social media should be listened to.

KSM made this call on Legends on TV XYZ hosted by Agyemang Prempeh (Agyengo). To him, there is too much lawlessness in the country and once that is fixed, most of the daily challenges of Ghanaians would have been dealt with.

He recalled how he tried to re-orient Ghanaians with his comedy show when he returned to Ghana from New York where he had lived for a while.

“In 1999 or so, I did a show called ‘the saga of the returnee’ and at that time I was talking about the Ghanaians and how we need to fix it…I pointed out all these psyche of the Ghanaian that is making us go wrong,” he told Agyemang.

“So I’m suggesting that that the fix it problem was there long ago. So it is a national crisis but do you know what is happening now? we are treating it like it is a partisan thing; that its Nana Addo’s government and therefore we need to fix it. It is something we all need to get involved to fix.”

Asked what was there to fix, KSM observed “there is lawlessness, there is indiscipline and the government has to do all it can to fix the indiscipline in this country, and to fix the lawlessness. That’s what is killing us because we have turned it into a partisan thing. ”

He disagreed with some members of the Akufo-Addo government who have tagged the protesters as NDC propagandists seeking to make the NPP-led administration unpopular.

See also  You will not be buried with your money, be humble – Akua GMB advises ‘the rich’

“Some are saying we don’t need to fix it you should fix yourselves. What can of mediocre, petty thinking is that?” We fix the country we make the laws work,” he lamented.

Asked if President Nana Addo Dankwa Akufo-Addo should fix the country, he said “Yes! he told Mills that ‘fix the economy’ so its not anything new. Why are we Ghanaians pretending that we haven’t heard of this before? Nana Addo was the first to say it. He told Mills that there was hardship in the country so fix it,” he asserted.

I Knew Ebony Very Well And She Wasn’t A Lesbian

Shatta Wale Endorses Stonebwoy As the Next MUSIGA President [Video]