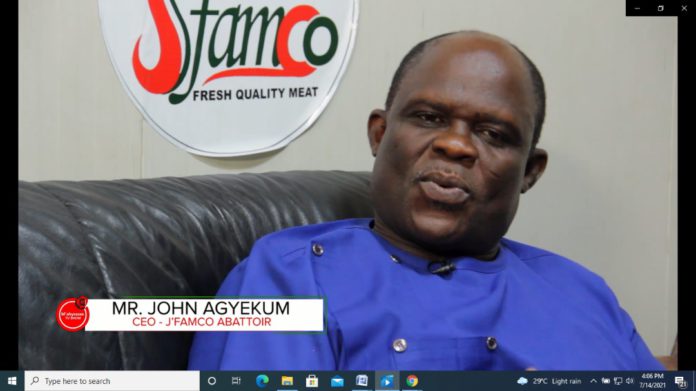 Through the wise counsel of my parents and my sister’s obedience, I managed to travel to Germany to seek greener pastures for myself and also cater for the family.

These were the words of the Chief Executive Officer of the Johnny Food and Meat Complex (Jfamco), John Agyekum, as he sits for an exclusive interview with Adom TV’s Afia Amankwa Tamakloe.

Though he had no idea what life outside of his country, Ghana had in store for him, Mr Agyekum explained all his desire as a 24-year-old man was to travel since that was the order of the day.

Going down memory lane, his elder sister offered to take him abroad to continue his life and find a career path, hence, travelled through Nigeria in November 1999 in his quest to make his dream a reality.

“I arrived in Germany safely but at the same time, my sister had relocated to Canada so I was all by myself and got married to a white lady to secure a resident permit. Fortunately, the marriage lasted for almost 13 years but we had no children because she already had two and had removed his womb to prevent further birth,” he said.

In narrating the genesis of the big meat complex in Ghana located at Madina estates in Accra, Mr Agyekum said it was all from his work as a cleaner in a Germany abattoir.

After about three to four years stay in the abattoir, I proposed to the Director that I wanted to manage the cleaning agency and make it my own and as someone who had so much faith in me due to my diligence and positive attitude towards work, he obliged.

“Within that period, the idea of recycling pork feet which was being thrown away at the factory daily came to mind. So I salted two pieces and brought it to my mum in Ghana but she expressed some reservations and also gave me an advice on how best I can make this work which I obeyed.

“I had to travel to Holland in search of preservation salt during which my friend connected me to some salt companies,” Mr Agyekum recounted.

Fast forward, he explained it became a profitable business and he started shipping in large quantities to a trader at Okaishie at the time who was in charge until he finally relocated to Ghana and developed it into the Jfamco meat complex it is now.

Speaking on some challenges he has faced these years, he noted the attitude of Ghanaians towards work was something citizens needed to work on for their own good and that of the country.

Wutah broke up because of money – KOD tells the story [Video]

You can still have your dream wedding by doing these 5...

Sarkodie Becomes The No.1 Streamed Artiste On Boomplay