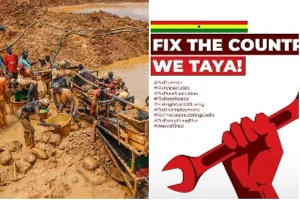 It is worrying to wake up overnight in a non-dictatorial regime to initiate a disguised action with strong political undertone in the name of # fix the country.

The Alliance for accountable governance ( AFAG) considers its action in bad faith by a few disgruntled persons hiding behind a non-political colouration yet attempting to mislead the public into thinking their actions were spontaneous. We consider this movement politically motivated and not out of vacuum.

This action is very political in the sense that the organisers have failed to bring suggestions to an otherwise resilient economy which was on a strong path of economic development( economic growth, structural transformation & equitable distribution of resources ) but ruined overnight by covid 19 and its attendant effect.

Indeed can the organisers discount the billions of Ghana cedis that had to be paid to customers including corporate institutions because of the near-collapse of banks in Ghana? That was a mess under a previous regime which was fixed by a new government. Can the organisers justify why the NDC took over an economic growth rate of over 8% of GDP in 2008 and shrunk it at its worst to 3.4% in 2016 for the new government sound economic management measures to move it to about 6.5% in 2019? Can there be money in the pockets ( microeconomy) if there are no aggressive macroeconomic gains? Which government fixed the economy for IMF to exit its programme that was blocking off even public sector recruitment in Ghana?

Indeed can the organisers justify why government had to fix toilets in houses along the coast or in selected areas in Accra as a national program in other to stop open defecation & the number of lives lost during the cholera outbreak in 2014 that claimed 127 lives with 14,411 cases?

Can the organisers justify why former minister Seth Tekpe refused to renew the LCs for the NMS project in August 2016 after a whopping 85% of the monies were released to contractors but about 50% of hospitals were done under the NMS projects? This had to be fixed just in 2021 after it’s back & forth of how to raise monies to complete a few including European hospital at Takoradi etc.

Without justifying why Kufour’s affordable houses which were well completed and set to be moved in were abandoned by the NDC government. Can the organisers say the same about the Salagmi project which looks completed on the outside but cannot be inhabited because of drains, plumbing works etc not been completed? However monies meant to fix 5000 housing units were used to fix a little over 1000 housing units even with that, it looks good on the outside but remains uninhabitable. Maybe the time to fix the issue is to get Hon Collins Dauda arrested and prosecuted for varying parliamentary approval and causing financial loss.

How do we fix this now when government is looking for money to fix your lives, and lives of all by pushing most disposable funds into covid 19 fight & vaccine purchases. These vaccines are to be administered free. Currently, the average fob per dose is about $20. Meaning our already financially challenged government due to covid will pay $ 40( 240ghs) per Ghanaian. Can the organisers help with ideas so as to get these excruciating covid vaccine prices on the low so government can fix our lives first?

Even so sad to say again is the fact that, with money in hand, developing countries are struggling to get vaccine to desperately save the lives of their citizens because those who manufacture in the western world need them too and we ( Ghana ) remain helpless. Can the organisers help government fix the country by finding reliable sources by getting any businessman they know regardless of their political association or not to augment government efforts to bring in vaccines to fix the lives of citizens because people matter?

Fellow countrymen, we all attest to the poor maintenance culture in Ghana and how national assets wear & tear over a short period of time. What is there to fix if a government had decided to expand its power transmission capacity, replace non-performing transformers? relocate power badges to the middle belt all within 5 to 6 months so Ghanaians can all enjoy a continuous & uninterrupted supply of power. Who will allow his father or relative to work on power transmission lines without shutting that transmission line down? Meaning certain parts of the country at that or any point will have to bear with government or for that matter the energy ministry so as to get at least some works done. Can the organisers fix the national grid maintenance with engineers who are able to work while there is power still flowing in the high tension cables?

FIXING A DEBATE TO GET TO UNDERSTAND # FIX THE COUNTRY ORGANISERS POSITION;

Finally,  AFAG challenges the organisers to a debate on debt stock, debt servicing, sudden increase in debt/GDP ratio to about 76% from 67%( due to freebies, PPE purchases and high expenditures on saving Ghanaians because of covid 19), gains in the fight against covid-19,  domestic revenue mobilisation under covid times & borrowing. If indeed there is one solution that fixes it all then that #fixthecountry will win their pursuits but for now a little understanding of the toxic mix situation we find ourselves in will do.

How Technology and Digitization Are Taking Over the World, as per...