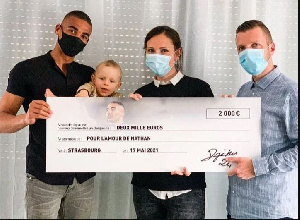 Ghana and Strasbourg defender Alexander Djiku has donated €2000 to the family of young Nathan who is suffering from Angelman syndrome.

The Black Stars defender showed the kind gesture to the family of Nathan after he was alerted by the young boy’s situation.

“One in 20,000 births, which affects a bit of everything” explains his father, Alexandre Schneider,” according to the DNA. “Nathan has hyperactivity, speech disorders, motor skills, sleep, and nutrition.”

Alerted by his wife about this fight, Alexander Djiku then came to the aid of the family.

“Helping others is in my nature, I was educated like that by my parents, maybe because we didn’t have much,” said the defender.

Djiku is currently with the Black Stars as they prepare for the friendly against Ivory Coast on Saturday.

He was part of the squad that lost 1-0 to the Atlas Lions of Morocco in a FIFA sanctioned international friendly game played on Tuesday, June 8, 2021.

Britain did not leave Ghana any money, it was a repayment...