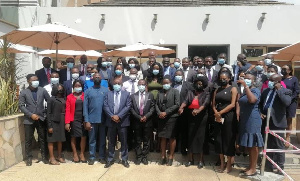 Some members of the Financial Action Task Force

Ghana has stepped up efforts to consolidate the gains chalked up on the anti-money laundering (AML) and counter terrorism financing (CFT) reforms in recent times.

It followed the successful and timely completion of the action plan drawn by the Financial Action Task Force (FATF) for the country to implement to help strengthen its AML/CFT regimes.

The efforts are tailored at Boosting the capacity of key institutions and players to be able to implement reforms, policies and laws on the practices.

Speaking at a sensitization workshop organised for financial sector players, the Chief Executive Officer of the Financial Intelligence Centre (FIC), Mr Kwaku Dua, indicated that, even though Ghana had completed its action plan, it was important that all stakeholders continued to work hard to consolidate the gains brought by the reforms in the AML/CFT regime.

The FIC is national body mandated to combat Money Laundering and Terrorism Financing (ML/TF) in the country and has been leading efforts by the government to revamp the AML/CFT reforms after the country was placed on a FATF grey list for having weaknesses in its regime.

It would be recalled that Ghana was placed on the Financial Action Task Force ‘grey list’ as a result of some deficiencies identified in her Anti-Money Laundering regime during its Second Round of Mutual Evaluation Report (MER).

An Action Plan was drawn for her with timelines by the International Co-operation Review Group (ICRG) to complete or risk being placed on the FATF blacklist with all its adverse effects on our economy. The International Co-operation Review Group of the FATF is the technical committee or group charged with the responsibility of identifying, reviewing and monitoring the progress of jurisdictions with strategic AML/CFT deficiencies that present a risk to the international financial system.

Following from ‘FATF’s action, the European Union (EU) also decided to place Ghana on their list of third countries with strategic deficiencies in the AML/CFT regime.

The FIC took up the challenge and with the support of relevant stakeholders executed the action plan even ahead of time.

At the recently held Inter-Governmental Action Group against Money Laundering in West Africa (GIABA) Plenary in Lome, Togo (from May 16-21, 2021), GIABA commended Ghana’s efforts and hoped that it would serve as a source of inspiration to other member States in the Sub-region.

It is to be noted that, Ghana is the first country in the Sub-region to have gone through the Second Round of Mutual Evaluation and completed the ICRG Process in record time.

As part of the ICRG Processes and Procedures, a team was in the country in May 2021 to conduct an onsite assessment based on which a final decision will be taken at the June, 2021 FATF Plenary meeting.

Inspite of the completion of the Action Plan, the CEO believes that work must go on unabated to reap the benefits of the action plan. He disclosed that the two workshops are only part of a series of capacity building programmes lined up, all to help strengthen our AML/CFT regime.

He used the opportunity to commend all stakeholders for their various roles played and advised that they keep the momentum.

Monopoly of WAEC must be broken – Clement Apaak

Every potential business in Eastern Region is priority