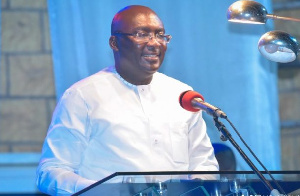 The International Monetary Fund, (IMF) has commended the government’s digitization drive, saying it will have a significant impact on Ghana’s economy.

In a press release issued by the IMF, following its assessment of the impact of Coronavirus on the Ghanaian economy, and what the government is doing to recover, the IMF listed digitization as one of the government’s positive initiatives which will play a key role in Ghana’s post-covid-19 economic recovery.

“Directors emphasized that the authorities’ structural transformation and digitalization agendas are critical to support the recovery,” the IMF noted.

“The structural transformation can be complemented by the ongoing energy sector review, diversification in tourism, and the digital transition, which has the potential to reduce corruption, boost tax revenues, and improve service delivery.”

The Vice President, Dr Mahamudu Bawumia, who has spearheaded the government’s acclaimed digitalization drive, has often spoken of the positive impact digitization will play on the Ghanaian economy, in the same manner, the IMF has highlighted.

See also  Pokuase interchange to be opened in July

The government’s digitization drive has seen the massive digitalization of several government services, including the ports, NHIA, application of passports and drivers licences, registration of businesses, among many others.

Ghana’s successful digitization drive has been built on a solid foundation of a remarkable delivery of over 15 million digital national identification cards in 4 years, digital addressing system and mobile money interoperability, which has made it possible for Ghanaians to be able to access government services online and pay for same using their mobile phones.

See also  80% of households enumerated as of 12th day

The IMF assessment revealed in detail, how the pandemic has affected Ghana’s economy, which it said was growing remarkably before the pandemic.

It, however, added that Ghana’s economy is seeing encouraging signs of recovery as a result of pragmatic steps by the government, with digitization as a key player.

NDC DEMO: Asiedu Nketia Marches For Justice In His Car –...