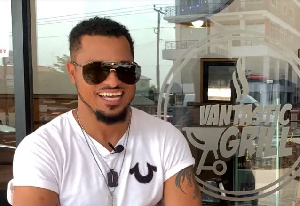 Contrary to news about Moesha’s ‘missing’ status, actor Van Vicker has been able to speak with her.

Since the video of Moesha trying to kill herself and later confessing and preaching at an uncompleted building went viral, sources revealed that the actress had gone ‘missing’. Most of her colleagues came out to sound the alarm after efforts to reach her proved futile.

Fortunately, Van Vicker has been able to speak to her. In a post made on his official IG page, the actor shared a pic of the two. The caption says, “I wanted to be sure you are well. So I called you @moeshaboduong. Glad we could talk. I have seen and heard the stories, I am not too clear on the matters arising but be strong and look out for your happiness.”

Yesterday, on 15the July 2021, the church in contention issued a statement that suggested that Moesha was no longer in their care. They fingered her family as the new chaperons. The statement reads, “ After discussions with her and with her family’s consent, we took her to a safe, and private space on Tuesday 13th July, away from distractions so as to expedite her recovery process with all related costs being borne by the church.

“During the evening of Wednesday 14 July, her family members made a decision to take her back home, and she is currently in their care. We were in the middle of our weekday service when we were called and informed of this development, and we respect their decision.”

Ghanaians made the mistake of criticizing Ebony’s style of dressing –...

Burna Boy takes Grammy plaque to club; drinks out of it...

Shatta Wale doesn’t talk to me, I’ve not seen him for...