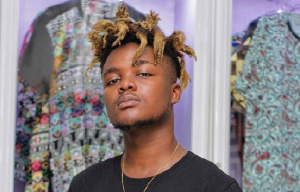 Quamina MP who has been warming the hearts of many Ghanaians with back-to-back hit songs stressed it’s evil to think of killing your brother because of money.

See also  VIDEO: "He Must Marry Me If He Wants Me Back In His House" - Funny Face's Baby Mama Spells Out Her Big Conditions For Her Return To His House

In an exclusive interview with Fiifi Pratt on Accra-based Kingdom Plus 101.9fm, Quamina MP indicates God will punish anyone who takes their fellow human to a ritualist.

According to the “Wiase Y3d3” hitmaker, the youth of today should cultivate the habit of working hard to make their own money and desist from resorting to dubious means to make money.

He was responding to a question asked by the host about his take on the Kasoa ritual killing.

Nana Ama Mcbrown needs orientation on how to moderate a show...