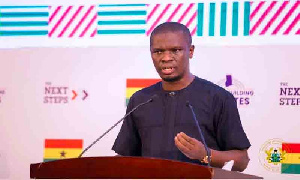 Govenment is seeking approval from Parliament for a US$170m loan facility to finance the upcoming African Games.

The amount would be used for the provision of sports infrastructure and residential facilities for the games to be staged in Ghana in 2023.

The amount, expected to be obtained through a facility from Cal Bank, was laid in Parliament on Thursday and referred to the Finance Committee of the House.

Government is racing against time to be ready for the 13th continental showpiece after abandoning plans to build a 50,000 capacity Olympic Stadium at Borteyman in Accra for the games.

See also  Porcupine is a tasty rodent used for soup, not a warrior

Sports Minister, Mustapha Ussif, early this month told the House Ghana would be ready for the games despite falling behind in the construction of the ultramodern Olympic sports facility.

He explained that the delay in erecting the facility was occasioned by the dreaded Coronavirus pandemic.

As a result, he said, the yet-to-be completed University of Ghana Sports Stadium and other existing facilities would now host the games.

See also  Dzata cement is not GH¢30, we are yet to decide price – Management

The facilities considered for refurbishment, he said, include the Accra, Kumasi and Cape Coast Sports Stadia and the Winneba College.

Apart from the time factor, other considerations that impacted the decision was value-for-money and long-term sustainability of the facility after the games.

“After careful study of timelines, the ministry in consultation with the LOC has decided to adopt a hybrid approach to construct the project in phases by leveraging on existing facilities at the University of Ghana and build the other facilities that are not available but are requirement for the hosting of the games,” he said.

The facilities to be constructed include a 1000-seater 8-lane swimming pool, 8-lane warm-up swimming pool, a 500-seater temporary dome for handball, judo, karate, taekwondo, wrestling basketball amongst others.

Others include a 1,000-seater multi-purpose hall to host badminton, boxing, volleyball weightlifting, table tennis, he told the House.

Majeed Waris reveals why he doesn’t have a tattoo