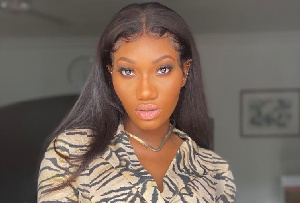 Ghanaian Afropop and Afrobeats singer, Wendy Asiamah Addo known in Showbiz as Wendy Shay has attributed her fast growth and progress in the music industry to God’s Grace.

According to her, she never saw herself getting to where she is currently and everything she is now could have only happened by God’s Grace.

Talking to Doctar Cann on Happy 98.9 FM’s Ayekoo After Drive Show she said, “I never saw it coming because we all have dreams but as to how or when we will achieve those dreams we all don’t know”.

She mentioned that, so far she has been in the music industry for three years now and she believes apart from her hard work, efforts and talent, God’s Grace brought her this far.

“I’ll say it’s purely Grace because I didn’t see this coming and I also wasn’t expecting to make waves as fast as I did so I’ll say it’s just by God’s Grace”.

Wendy Shay highlighted that to date, most of her friends are always in shock whenever they see her because they are amazed at her process and did not even see it coming, “even myself I didn’t see it coming that I’ll be this huge within the shortest period of time,” she revealed.

Wutah broke up because of money – KOD tells the story [Video]

My Dream Is To Become A Pastor – Mr Eazi