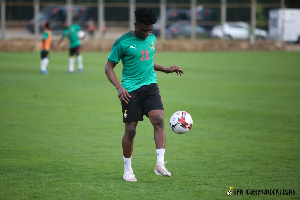 Black Stars head coach, Charles Akonnor has heaped praise on youngster Mohammed Kudus after insisting that the Ajax sensation is one who can produce magic at any given time.

The 20-year-old was in action for the Black Stars on Tuesday night when the team suffered a narrow 1-0 defeat to the Atlas Lions of Morocco.

Despite the defeat, Mohammed Kudus impressed and was undoubtedly the best player of the match.

Speaking at his post-match interview, coach CK Akonnor confessed that the talented attacker is one of his best players.

According to him, the Ajax star can produce something out of nothing when given the chance to play.

“He is a good player, fantastic. He can produce magic at every given time. Our Captain (Andre Ayew), and his brother (Jordan Ayew). We played with some team spirit and understanding and that is what excites me.”

“I am very happy about the way we played; of course I am not happy that we lost so we need to look forward to how to improve in that area and that is my thinking now,” Coach CK Akonnor said as quoted on ghanafa.org.

Up next for Ghana, the Black Stars will take on the Elephants of the Ivory Coast later this week.