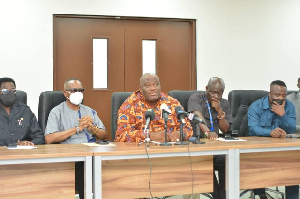 As part of his ‘Let’s Make Accra Work’ campaign, Greater Accra Regional Minister Henry Quartey, is rallying support from both aisles of parliament to push for the passage of a by-law to compel households, individuals and institutions, to be responsible for keeping their immediate environments clean.

Mr Quartey, who has already been able to decongest and clear some parts of the capital city, notably the Agbogbloshie market, wrote on his Facebook page that: “Yesterday, I met with the Greater Accra Parliamentary Caucus from NPP and NDC, Council of State Member, Hon. Stanley Nii Adjiri Blankson and Greater Accra Regional Chairmen of NPP and NDC and their executives, to deliberate on the passage of the ‘Operation Clean your Frontage’ By-Law, which seeks to task individuals and corporate organisations to be responsible for the cleaning of their immediate environment”.

Commenting on the move, the Executive Director of the Centre for Democratic Development (CDD), Prof H Kwasi Prempeh, said: “In the business of doing what whole Ministries for the Beautification of the Capital City, etc. couldn’t do”, the initiative by the regional minister “proves that it does not take the creation of new ministries or agencies or authorities or offices to solve old problems”.

For example, he wondered, “why do we have to establish a new so-called Hydraulic Authority – with a board, etc., etc., – to solve our perennial flooding problem, when we can have the relevant RCC hammer out a plan between NADMO, the Fire Service, Field Engineers Regiment, EPA, and MMDAs”.

Prof Prempeh noted: “Henry Quartey’s focus on bringing some order and discipline to our capital city’s chaotic and ugly built environment marks him out as one politician who gets the big importance of seemingly ‘small’ things”.

“He would be my choice for Accra’s first elected mayor”, Prof Prempeh said.

There is hardship in the country

Bawumia does not understand ‘practical’ economy