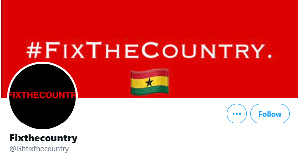 Social media has increasingly become a campaign and or protest platform of choice in the last few years, more so for young people who are tech-savvy and social media friendly.

Trends show that social media activism is not a phenomenon specific to Ghana but rather a global one that has been given prominence thanks to social media platforms like Facebook, Twitter, Instagram, and WhatsApp.

Hashtags are one of the unique features that help people on social media to rally around particular causes.

A hashtag is a word or phrase preceded by a hash sign (#), used on social media websites and applications, especially Twitter, to identify digital content on a specific topic.

Ghana’s ever-growing Twitter space has had some instances in the last few years that people have rallied around a particular hashtag to champion a cause or protest official inaction.

The most recent is the #FixTheCountry hashtag that gained strong traction on especially Twitter as a group of young people started a campaign demanding accountability and good governance from the government.

Even though #FixTheCountry was the first hashtag that started the campaign, some different variants were also introduced in the course of the advocacy.

#FixThisCountry – Along with the ‘mother’ hashtag, this version was also widely used as activists tweeted photos, videos, and other materials calling out the political class and demanding government does better.

#NameAndShame – This hashtag was introduced on Friday, May 7, as a second leg of the online protest. It revolved around calling out especially Members of Parliament, MPs.

Tweeps posted photos of unfulfilled political promises and adds a photo of the MP expected to execute the task.

#FixMotherGhanaNow, #FixGhanaNow – these also trended at a point during the campaign especially in the lead-up to a planned on-ground protest that eventually was held online after a court injunction forced activists to roll back plans.

#FixTheCountryGhana – this variant was very prominent especially on May 9, i.e. the day of the online protest.

Activists and supporters of the cause tweeted protest messages and demands with the hashtag; with a lot of people using it after posting photos of a police contingent that surrounded Independence Square in Accra where the protest was meant to take place.

It’s the responsibility of the citizens to abide by working laws. But the laws do not work. Our sanitation system does not exist. Our leaders will never allow their children to learn in this kind of environment, why should we ? #FixMotherGhanaNow #FixTheCountryGhana pic.twitter.com/qbDW9MAoj3

What is sure is that, be it for good or not so good reasons, social media will continue to be a force for mobilization for different causes and as has been seen in the past few years an avenue for accountability demands.

Different people interpret the outcomes of these protests as they wish but for many experts in the online space, getting authorities to notice and to take action about an issue is always a win for activists.

The #FixTheCountry protest may remain an online movement for now but activists will be happy that government noticed and duly responded with the Vice-President addressing the protesters’ demands in a Facebook post.

Watch a discussion on #FixTheCountry from the 21st minute of the video below.

No 15% base pay rise for CLOGSAG – Finance Ministry clarifies

Think of pupils who lie on their stomachs to write in...

It’s not a pleasant time for us