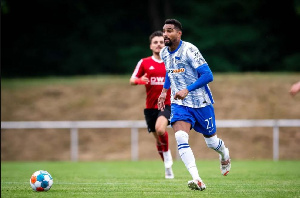 The 34-year-old joined the German Bundesliga side in June as a free agent after his contract with Serie B side AC Monza expired at the end of the season.

The former AC Milan star seems to have settled in at his boyhood club and has won the trust of the coach with his performances with the team in preseason.

Hertha Berlin coach is delighted with the contributions of the former Barcelona midfielder ahead of the season.

See also  Pronouncements of Akufo-Addo and some ministers

“Prince plays the penultimate ball, collects goal contributions and calms the team down. And his passes are just great, that brings us further, ” said the Hertha BSC coach’s according to“ Bild ”.

“Defensively, he has to do a few more meters when he’s fresh again. But he’s a professional, he’ll manage that. “, Dárdai said on the defensive abilities of the former Ghana International.

Nowhere in Ntiamoah’s report is stated First, Second ladies are to...