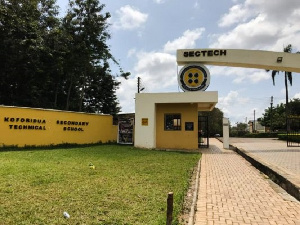 The main entrance of the Koforidua Secondary Senior High School

• He adds that he was not influenced by anybody, not even the sector minister

Ofori Antwi, the headmaster of the Koforidua Senior High Technical School has said that he apologized over the viral video which exposed bed challenges at the school because it was being used to attack the free SHS policy of the current government.

Captured in a video taken by an old student of the school, some students were seen sleeping on the floor in congested dormitories, coming right in the wake of increased public scrutiny of the challenges confronting students as a result of the Free SHS policy.

Following that, the government responded, giving the school 350 double-decker metal beds and 700 pieces of mattresses.

But, in an interview on the Morning Starr with Francis Abban, the headmaster of the school, Ofori Antwi explained that the apology was offered on his accord without any influence from his superiors at the Ghana Education Service or from the sector minister himself.

Also, he indicated that he was not worried when the Minister of Education, Dr. Yaw Adutwum, mentioned him and the video during his appearance on the Minister’s Press Briefing on Sunday, June 6, 2021.

“I was okay with the minster asking that I do a video when the items are believed because I’d made a promise to myself that when the things are fixed, I’ll counter that video. The education minister didn’t call after the video went viral but the Deputy Director-General called me. Before the video went viral, they didn’t ask my permission and that’s where I had a problem,” he added.

Meanwhile, the Chief Perfect at Koforidua SECTECH, Benjamin Ampah Dukakis, said it is the inadequate bed situation that forced some students to sleep on the floor, describing it as a nightmare that affected their academic performances.

“In terms of where to sleep it was a very major problem and for today we are privileged to have these beds, I think this will help subsidize the rate at which students had nowhere to sleep. We thank the President, the Education Minister, we will make all effort to keep it in good condition so that could be passed on to generations to come,” Benjamin Ampah told Starr News.

Meanwhile, the New Juaben Municipal Education Director, Victor Degraft Etsison stated that the intervention is a manifestation of the government’s commitment to responding to the needs of the country’s various public senior high schools.

Say No To Galamsey Kingpins & Their Money – Ablakwa To...

Intelligence with energy minus integrity is poisonous