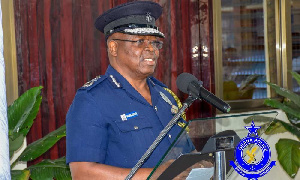 James Oppong- Boanuh is to be removed as IGP

Sources within the corridors of power have confirmed to GhanaWeb that Mr James Oppong- Boanuh is to be removed as IGP.

James Oppong- Boanuh has endured a torrid time as IGP and in recent months has seen a rise in persons calling for his removal, especially after an attack on a bullion van at Adedenkpo, a suburb of James Town in Accra which led to the shooting and death of a police guard and a trader.

Last month, Sulemana Braimah, the Executive Director of the Media Foundation for West Africa (MFWA) called on President Nana Addo Dankwa Akufo-Addo to remove James Oppong-Boanuh because he lacked the competence to lead the police service.

According to our sources, George Akuffo Dampare is leading the race to be named the new IGP.

Dr Dampare is currently the Director-General in charge of Administration at the service.

Dr Dampare has long been mooted as one of the people with the credentials to lead the police service.

He will take over at a time there is a general belief of insecurity in the country and will have a tough time restoring public confidence in the police service again.

When confirmed, Dr Dampare will become the youngest IGP to be appointed in the Fourth Republic at age 50.

He joined the police in 1999 as a Constable and has since risen through the ranks.

He holds a PhD in Finance and became a Chartered Accountant at age 25 while with the Ghana Police Service as a Constable.

He is the youngest Commissioner of Police in the 4th republic having attained that high rank at age 44. Among the current number of eleven COPs, he places fourth in order of seniority.

Hearts of Oak players to dominate next Black Stars call-up –...