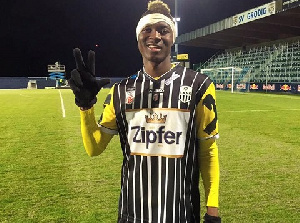 Boateng’s representatives have held a number of meetings with SV Ried chiefs in the last couple of weeks to extend his stay at Josko Arena.

The 24-year-old has impressed since joining the side on a permanent contract after an initial loan spell at LASK Linz.

The Ghanaian star has clocked 22 appearances under his belt this season to prompt the Austrian side to extend his deal.

However, talks to extend his deal has hit a snag after with both parties yet to reach an agreement, leaving the defender’s future in the air.

“There have been talks for a long time, we made the player an offer, but we can’t meet the financial expectations of his management. We really want to keep him, but we certainly can’t do that at any price,” he said

Kennedy Boateng joined LASK from WAFA in the 2016/17 season before joining Ried on loan after struggling to break into the LASK team.