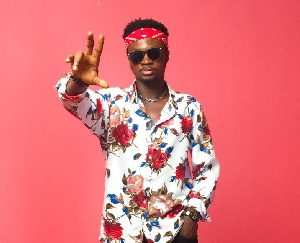 Kweku Darlington is the brain behind ‘Sika Aba Fie’

Born Emmanuel Kweku Owusu Darlington on July 17th, 1996, Kweku Darlington, as he is popularly referred to, is a singer/rapper & music producer from Ghana, West Africa.

Darlington started writing & recording music at the age of 14 and since then, it has been his source of happiness.

He entered the TV3 Mentor Reloaded competition in 2019/2020 in which he gained a lot of followers due to his amazing concepts of music and performances.

Kweku Darlington released his first single ‘Obaa Ne Barima (Woman and Man)’ after the show, with a video which went viral on Facebook and Instagram.

He further released two other singles which did barely well as compared to his first single. ‘Obaa Ne Barima’ is one of Kweku Darlington’s most talked about and successful singles.

His recent release ‘Sika Aba Fie’ featuring Yaw Tog & Kweku Flick was the most played song on Ghanaian Radio as at 21/03/ 2021 and was his breakthrough.

“Sika Aba Fie” became the anthem on the street right after the release and triggered artistes like Kuami Eugene and Fameye to join forces with talented artist Kweku Darlington on the remix.

‘Sika Aba Fie’ is a Twi phrase directly translated in English as “Money Has Come Home”; a drill song that preaches hard work and how necessary it is to go get it.

Kweku has moved on to record songs with the winner Big Brother Naija 2019/2020 Laycon and it is scheduled to be released on the 6th of August 2021.

UK based Ghanaian DJ, DJ Paak releases a summer anthem and he calls it ‘We Meuve’

“Don’t Be Discouraged By Others In Achieving Your Goals In Life”-Opanka...

I love Kaywa and KODA for their maturity – Zapp Mallet