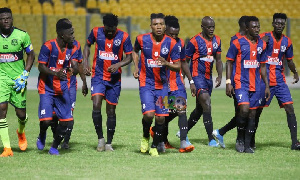 Legon Cities head coach, Bashir Hayford, is confident that his team will finish in the top four at the end of the 2020/21 Ghana Premier League season.

The Royals have managed to battle out from the relegation zone after a torrid start of the campaign.

With six matches remaining to end the season, Legon Cities occupy the 9th position on the league log with 38 points.

Bashir Hayford says football fans should not be surprised to see the club finish in the top four at the end of the season.

“Ones we are on the winning way, if we get four [wins] out of the six [remaining matches], then you will know where we are going to lie,” the veteran trainer told africa-foot.com.

“Nobody is counting us among the top four but [with God] everything is possible,” he added.

Legon Cities have a tough test against Karela United at the Crosby Awuah Memorial Park on matchday 29.