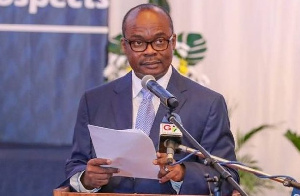 Lending rates demanded by commercial banks in Ghana will begin to be cut this week in response to the Bank of Ghana’s announcement, a week ago, of a 100 basis points cut in its key Monetary Policy Rate, bringing it down to 13.5 percent in a move that many had hoped for but few had really expected. While the lending rate cuts will not be commensurate to the reduction in the MPR, they will nevertheless be substantial.

Indeed just two days after the central bank’s announcement, a drop in the Ghana Reference Rate to 13.80 percent was announced. The GRR serves as the base lending rate for all the banks and is set by the banks in consultation with the BoG using a set formula. Individual banks then set their respective effective lending rates by computing a risk premium above the GRR based on the perceived risk inherent in each loan they book.

The managing director of after the bank’s annual general meeting, held virtually, last Friday (see story inside) said he expects lending rate cuts of between 40 and 40 basis points. Being Ghana’s biggest commercial bank, Ecobank has a huge influence on pricing across Ghana’s banking industry and its competitors can be expected to generally follow its lead.

See also  'I knew that if I confirmed I was an Ewe, my beatings would have been double, double'- Citi FM's Caleb Kudah » GhBase•com™

A smaller drop ineffective lending rates than in the MPR Band the GRR is because of the relatively high credit risk banks perceive during this era of economic uncertainty imposed by COVID 19. The industry’s non-performing loan ratio still stands at above 15 percent and banks have consequently been adjusting their respective balance sheet structures towards investments in risk free government domestic debt securities rather than loans to customers.

The key MPR cut is aimed at supporting Ghana’s ongoing economic rebound – as confirmed by the latest data from the BoG – after the economy had suffered two consecutive months of recession during the second and third quarters of 2020 as a result of the economic impacts of COVID 19 and the necessary socio-economic restrictions imposed by government its curb its spread.

The central bank’s interest rate cut is the first since March 2020 when it cut the MPR by 150 basis points to contain the inevitable economic slump occasioned by COVID 19’s arrival in Ghana.

The latest data from the BoG confirms that economic growth is picking up after it returned to positive territory in the last quarter of 2020 following two consecutive quarters of contraction which officially put Ghana in an economic recession. The central bank’s Composite Index of Economic Activity, – which measures economic activity rather than economic value used by the Ghana Statistical Service in computing Gross Domestic Product – recorded year on year growth in real terms of 26.8 percent in March, up from 8.9 percent in December last year. In the month of COVID 19’s arrival, March 2020, it declined by 1.9 percent and slumped further to an all- time record contraction of 10.5 percent in April last year, as a three week lockdown of Ghana’s two biggest urban centres – Greater Accra and Kumasi – took its toll.

The latest surge in the CEIA has been propelled by domestic consumption (measured by VAT collection), construction activities, international trading activities, resumption of industrial production activities and air-passenger arrivals. The latest Ghana Purchasers Managers Index, which gauges the rate of inventory accumulation by managers of private sector firms and measures dynamics in economic activity, also improved in April 2021.

The latest interest rate cut leverages on the most recently recorded fall in consumer price inflation, which fell back into single digits at 8.5 percent in April from 10.3 percent in March underpinned by a rare 0.5 percent appreciation of the cedi against the United States dollar in May, both of which have opened the door for monetary easing in order to support faster economic growth.

Importantly the lowering of lending rates that will result from the latest cut in the MPR will help to head off the negative consumer and business sentiments occasioned by the recent increases in taxes as announced in the 2021 budget which are expected to generate inflationary pressures. Indeed this is why many economists and public policy analysts had expected the BoG to put a hold on any monetary easing for now. However the BoG says it expects those imminent inflationary pressures to be muted and temporary – indeed it is confident that inflation will not rise above the 10 percent upper limit of its inflation target band by mid year – although it prudently also assures that it will monitor the effects of those pressures closely.

John Dumelo Endorsed By Mzbel Ahead Of 2020 Polls