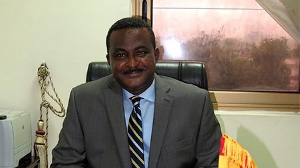 Member of Parliament for the Cape Coast South Constituency George Kweku Ricketts-Hagan has made a passionate call for former members of Parliament to be supported be it in kind and in cash.

The National Democratic Congress (NDC) MP said most of the MPs who lose elections by the will of the people find it difficult landing fresh jobs.

“When you usually finish being a Member of Parliament, it is usually difficult for obvious reasons for people to hire you,” he acknowledged.

“First, they may not be able to pay you to put you back on your salaries as a Member of Parliament. [Secondly] our country is polarised with politics, so somebody employing you, that company will be deemed to be a supporter of a particular political party as a result of employing you and that could go against them if there is a different political party in power.”

The former Deputy Finance Minister expressed these concerns on Sunday, June 6 when the family of the late John Ernest Ekuban called on him at his residence.

The family was there to officially announce the death of the former MP for Cape Coast, the sad event which occurred at the Ridge Hospital.

Pushed Into A River!!! How A Politician Was Manhandled After He...

‘It’s big achievement for me’