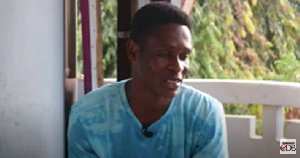 Abraham Kwabena has advised the youth against engaging in galamsey

A 21-year-old ex-galamseyer, Abraham Kwabena Mensah has disclosed his bitter sweet experience in the space of small scale mining popularly known as galamsey.

He stated that, he joined that in order to secure finances to further his studies after Senior High School.

Speaking with Darly Doku on Multi CDB’s truth show, he stated that he was introduced to galamsey by his friend after completing SHS since he was in dire need of a job that paid well.

In answering the question on whether galamsey was the only profitable option, he said ” I had a job at circle as a vulcanizer but that didn’t pay at all. I only got what I will use as food which is GHC15 . “

“My first earning as a galamseyer was GHC30. Though it was little, it was very encouraging. I was able to earn as much as a thousand Ghana cedis which is my largest earning,” he said

He stated that he was not going to squander the money on ladies and food as others have been doing but use that to further his education.

He disclosed that he quit galamsey after his best friend died when a mining pit caved in. Abraham Kwabena said the experience of losing his friend left with him no option than to desist from the act.

Having glean loads of experience from the galamsey menace, Kwabena urged the youth in the country not to go into galamsey as it could destroy their lives and the land.

“My best died during one of our operations and that’s what made change my mind about galamsey. It was a difficult time for me so I decided to stop and work on something different. My advice to young folk out there is that , they should not be in a hurry in search of money to engage in Galamsey. It destroys the land” he said.

Ghana’s prosperity is in the hands of Bawumia and Napo