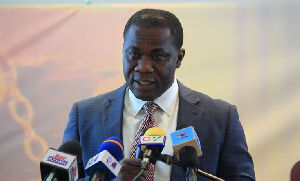 President of the Ghana Chamber of Mines, Dr Eric Asubonteng

The Ghana Chamber of Mines has reiterated its call for an increase to 30 per cent from 13 percent mineral royalties that go to the host mining communities for development purposes.

Dr Asubonteng who was speaking at the recently held Annual General Meeting (AGM) of the Chamber, added that the share of mineral royalty that was used to support development in mining communities was negligible.

This year’s AGM was themed “Positioning Ghana as a mining support services hub.”

Addressing the issues of royalties due host communities, Dr Asubonteng stressed “obviously, this is woefully inadequate to address the infrastructure shortfalls in the hosts of the country’s mineral wealth.”

He pointed out that apart from the statutory proportion of mineral royalty that was returned to the host mining communities, all the other streams of fiscal revenue originating from the mining sector accrued to the central government.

“In the case of mineral royalty, only 13 per cent of the mineral royalty is returned to the communities where mining takes place. Out of this amount, 4.95 per cent accrues to the respective District Assemblies while the Mining Community Development Scheme (MCDS) set up under the Minerals Development Fund Act, 2016 (Act 912) receives 4 per cent. The remaining amount is disbursed to traditional authorities and stools in the host mining communities,” President of the Chamber explained.

According to Dr Asubonteng, the poor state of mining communities was largely a function of the development status of the country as well as an outcome of the mechanism for allocating and utilising fiscal revenues realized from the extraction of mineral resources.

The Chamber noted that the western railway line, which was the primary mode of hauling bulk minerals to the Takoradi port, had deteriorated over the years due to obsolescence and limited investments.

Consequently, bulk mining companies, like the other producers of bulk export commodities, had had to make use of the more expensive road haulage option, which was estimated to be 50 per cent more expensive than rail.

According to the Chamber, successive budget statements and economic policies consistently poinedt out the intention of government to rehabilitate the western rail network yet nothing was done.

“As an industry association, we believe that the benefits of a well-functioning railway system will not be a preserve of our industry but the entire economy. It will also serve as an alternative means of transporting people, foodstuff, and other commodities across the country. The Chamber is therefore pleased at government’s efforts to rehabilitate the country’s railway network, particularly, the western railway line.,” the President said.

It urged government to expedite action since it had the inherent potential to generate revenue to pay back the initial investment cost.

Labour Minister angered by question on child labour, storms out of...

#FixtheCountry: The Youth’s Grievances Are Legitimate; Fix It Or We’ll Regret...