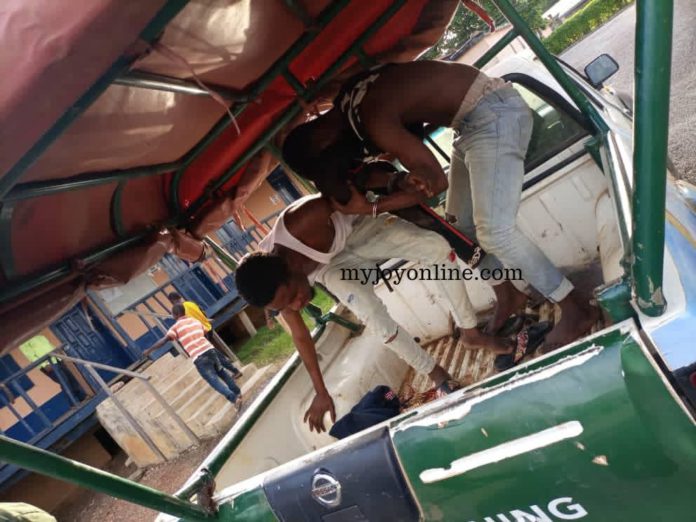 Two persons are receiving treatment at the Koforidua Regional Hospital after they were allegedly shot by several members of the community mining protection unit at Adeiso in the Upper West Akyim District of the Eastern Region.

They were said to have stormed several land winning concessions and unleashed brutalities on some workers who had questioned and resisted their operations.

The team has been accused of stealing a cash of more than ¢90,000 after they attacked the sand wining firm.

Samuel Ato Forson, one of the persons, whose concession was attacked, alleged that the suspects intimidated and extorted money from the workers.

According to him, they shot the thigh and legs of two of his workers on duty who had questioned why they retrieved the over Ghc90k from his accountant.

Mr Forson explained that they alerted the firm’s drivers who blocked the main Adeiso road with their tipper trucks to aid the police and some residents in arresting the suspects.

Three of the suspects were apprehended by the Adeiso District Police Command.

According to Ato Forson, the police retrieved AK-47 assault rifles, ammunition, police and military uniforms and other accoutrements when they searched their vehicles.

The suspects, Mr Forson alleged, have been set free by the Adeiso Police.

When contacted, the Adeiso District Police commander confirmed the incident. He, however, declined to comment on the release of the suspects.

He stated that “the case was a fresh one and it wouldn’t be appropriate to comment at this time.”

25 Districts Get Priority In Census Mop Up Exercise | Social