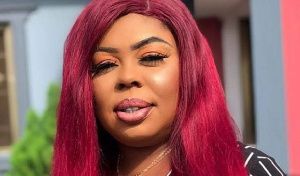 The vocal Ghanaian media personality and entrepreneur became furious after some people stated that she has not made any post about Moesha’s issue.

She argued in a video sighted by Zionfelix.net that posting her photo won’t solve any issue.

Afia blamed some Ghanaians for causing Moesha Boduong a lot.

According to her, the backlashes left her in this situation.

She further tagged them as stupid and hypocrites.

Afia Schwarzenegger added that their comments following Moesha’s repentance were not encouraging.

“Not everyone is stronger like I am,” she stated.

“I respect my boyfriend” – Efia Odo explains distance from Shatta...