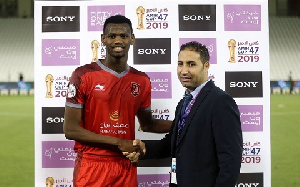 Muntari being congratulated after the match

Grenada was beaten 4-0 for the second match in a row in the CONCACAF Gold Cup, this time against Asian champions Qatar in Texas on Saturday night.

After losing by the same amount against Honduras in their first Group D encounter last Tuesday, Grenada surrendered three first-half goals to fall out of contention early at the BBVA Stadium.

Abdelaziz Hatim started the scoring in the 11th minute before Akram Afif doubled his side’s score in the 22nd and Mohammed Muntari added the third in the 36th minute.

Al Moez struck a fourth soon after halftime to put the game firmly out of reach.

Goalkeeper Jason Belfon fell down after clashing with Abdelaziz Hatim who went up for a header, and then tapped in the loose ball with Grenada appealing in vain for a foul.

Jacob Berkeley-Agyepong then shot wide at the opposite end in the 18th minute before Akram Afif increased Qatar’s advantage by curling home from 20 yards.

Muntari headed in Akram Afif’s close-range corner at the near post before captain Aaron Pierre failed to make a proper interception in the box from a right-sided cross, allowing Al Moez with a simple tap-in in the first minute after the interval.

The anger of Ghanaians will continue to rise if country is...

‘Galamsey Fight Won’t Be A Success’ – Abronye Says Prez Should Rather...