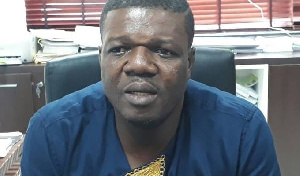 Member of Parliament (MP) for South Dayi Constituency, Rockson-Nelson Dafeamakpor has debunked the assertion that the opposition National Democratic Congress (NDC) is challenging the allowances given to the 1st and 2nd ladies of the country.

According to him, the President and his Vice can decide to pay some allowances out of the huge budget that goes to the Presidency to their spouses without raising any eyebrow of the public.

Speaking on Okay FM’s ‘Ade Akye Abia’ Morning Show, Mr Dafeamakpor said that some of them are in court to rather challenge the clandestine move by the Ntiamoah-Baidu Committee to smuggle the spouses of the President and his Vice into the Article 71 officeholders.

He clarified that Article 71 officeholders are the reserve of the employees of the government who deserve salaries and some benefits at the end of every month for their services to the nation and not the spouses of the President and his Vice who do not hold any public office.

” …but to use a dubious way and include the spouses in the Article 71 officeholders as if they are employees of the government who deserve salaries at the end of every month is the case we are challenging in court because it is illegal or unconstitutional,” he indicated.

Commenting on the Ntiamoah-Baidu Committee, Rockson-Nelson Dafeamakpor maintained that the mandate given to the committee was to review the emoluments and privileges of the Article 71 officeholders.

He added that the committee included in its recommendations that the spouses of the President and the Vice President should be paid a monthly salary; giving the options to either pay 80 per cent of the salaries of someone serving as MP and also a Cabinet Minister or MP who is also a Minister of State.

“The first option the Committee gave was that if you are the spouse of a one-term President, we give you a monthly salary which is 80% of someone who is MP and also a Cabinet Minister. And if your husband is a two-term President, the salary you are supposed to receive will be that of an MP who is also a Minister of State . . . meanwhile, the two wives are not part of the Article 71 officeholders and that is the substance of our case,” he explained.

Bullion van attacks in the first half of 2021

‘Vampire’ gives chilling confession of killing over 10 children, drinking their...