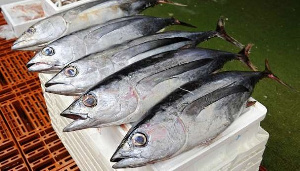 The Ghana Tuna Association has raised concerns over the rising spate of pirate attacks on the country’s territorial waters.

The call comes after reports suggest Ghana has since 2020 up until date recorded some 10 pirate attacks on deep-sea fishing vessels on territorial waters.

But the association however believes such attacks, if not quickly addressed, will potentially ward off investors and stakeholders interested in the tuna value chain which will impact negatively on their businesses.

In an interaction with Citi Business News monitored by GhanaWeb, President of the Association, Richster Nii Armah Amarfio urged for a diplomatic approach to dealing with the menace.

“We are hoping to meet the President [Nana Akufo-Addo] after earlier arrangements to meet him failed. We have one major concern because we have reliable information that the Koreans, who engage in high-level fishing in our waters, are about promulgating a law barring their citizens from fishing in the Eastern part of Ghana to Benin, which they describe as a high-risk maritime zone within the Gulf of Guinea.”

“What it means is that we will have a lot of challenges, especially those of us engaged in tuna fishing. Because tuna fishers move towards the east for their anchovies and further fishing for tuna in those waters extending all the way to Benin. We, therefore, need to have some diplomatic intervention to deal with the emerging threat of legislating against anyone fishing in the high-risk zone,” he added.

Meanwhile, the ECOWAS Parliament has hinted that Ghana’s high seas are increasingly becoming an attractive haven for maritime pirates who target commercial cargo and fishing vessels using the sea routes from the Gulf of Guinea.

Review processes leading to a collation of election results – Akoto...