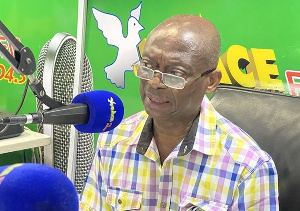 Seasoned Journalist, Kweku Baako Jnr has taken a swipe at the Minister of Health, Kwaku Agyeman-Manu over his recent statements regarding the purchase of Sputnik V vaccine for Ghana.

The controversial contract saw Ghana procuring the vaccine at a unit cost of 19 dollars as against the ex-factory price of 10 dollars per dose.

But this agreement is said to have been sealed without Parliamentary approval, hence calling for the Minister to face a Parliamentary Committee probe.

Answering questions at the sitting of a bi-partisan probe by the Committee, the Health Minister stated that he failed to seek an approval because he wasn’t thinking properly and also out of frustration.

He said, “I was in a desperate and helpless situation with the management of the covid numbers. In February, we had 78 deaths; by March, we had 56 deaths, and these were the numbers that pushed me to act…if you were the Health Minister, I think you might have taken certain decisions that in hindsight you may not have done those things. The country was not in normal times…this was the environment I found myself in and out of desperation, frustration, and so many things.”

“I relied on the Executive Instrument 61 passed by Parliament and hid behind emergency clauses that have been invoked to do that and come to Parliament and inform the House that this is what I had done and, therefore, I need regularisation and need the approval to provide it.”

“I was seriously in a situation that could not make me think properly. I dealt with the Sheikh before the frantic efforts to get the vaccines from the right source. I made efforts, but I did not juxtapose the timing with the efforts that I made. I made that error and in hindsight, it won’t happen again.”

Touching on the issue, Kweku Baako sent a subtle message to the Minister saying he should resign for infracting the laws as required in Article 181(5) of the 1992 Constitution.

Speaking to host Kwami Sefa Kayi on Peace FM’s ‘Kokrokoo’, Mr. Baako stated that if Agyeman-Manu “is minded to resign, I think I will vote for him”.

According to him, “elsewhere the culture is such he would resign voluntarily. It’s almost a culture elsewhere, but here, there are a few people who have resigned before from office for whatever reasons but it’s not everyone who does that. If he is minded to resign, I think I will vote for him”.

Seemingly offering an advice to the Health Minister, Mr. Baako emphasized, “the fact that we want to save people because dead men don’t talk, dead men don’t work, we need us to be alive but it doesn’t mean then you can push aside all laws and regulations because you’re desperate and frustrated,” he said.

From ‘lil naughty girl’ to an astute academic

Only one quarter of Ghanaian agribusiness firms aware of AfCFTA –...