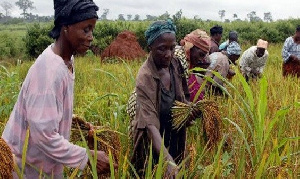 Rice farmers at Fumbisi and Tono in the Builsa South District and Kassena-Nankana Municipality of the Upper East Region are in dire need of Government’s subsidized fertilizers under the Planting for Food and Jobs (PFJ) programme to boost yield.

Some of the farmers who had increased their production in this year’s farming season in anticipation of good market to sell their produce after the harvesting season, are disappointed they could not get the PFJ subsidized fertilizers in the region to buy.

Mr Richard Akoka, a rice farmer at Gbedembilisi in the Builsa South District, speaking with the Ghana News Agency (GNA) in an interview, said “The PFJ fertilizer is completely out of the system, we don’t even see it not to even talk of buying.

“We have the money but can’t get the fertilizers to buy. That is the biggest challenge we are facing this year’s farming season,” he said.

He said the initial price of the 25 kilogramme bag of NPK fertilizer was sold for GH 48.00, but that increased to GH 53.00 this year while Urea had been adjusted to GHC 50.00 from the old price of GHC45.00, adding that even with the price adjustment, the fertilizers were not available.

The rice farmer said he got good market for his rice last year, and therefore increased production this year from 250 to 400 hectares, “Last year I got market for my rice, and so I anticipate good market this year that’s why I decided to increase production.”

He said the rainfall pattern was normal for the crops, and further emphasized the urgent need for fertilizers for their crops in the area.

Mr Clement Kansake, another rice farmer at Korania in the Kassena-Nankana Municipality, who also expressed worry about the shortage of fertilizers, said he resorted to organic fertilizer for his crops, and appealed for immediate intervention from government.

He suggested that the PFJ subsidized fertilizers should rather be stored in the various warehouses constructed under the PFJ programme so that organised farmer groups could register and buy directly from the warehouse, instead of dealing with Agents.

Dr Charles Nyaaba, the Head of Programmes and Advocacy of the Peasant Farmers Association of Ghana told the GNA that the shortage would have an impact on crop yield. “Our lands are virtually infertile.

“And because of how the PFJ programme had been promoted, we have farmers increasing their farm size, and new farmers coming on board but without the fertilizer, it will affect the yields drastically,” Dr Nyaaba said.

He said the Association would propose to government for an overhaul of the fertilizer subsidy programme, “The programme is putting a lot of burden on government, we think that government should come out with alternative support system for small scale holder farmers.

“It is too late, but we are following up to see how government can put in emergency measures to ensure this problem is addressed. After that, we will engage government to ensure different arrangement is made to make it possible for farmers to buy fertilizers,” he said.

According to a letter written by the Ministry of Food and Agriculture, signed by the Director of Crop Services, Mr Seth Osei-Akoto, the increase in prices of fertilizer on the international market had made the old prices uncompetitive and that had necessitated an upward adjustment of the prices of subsidised fertilizer.

MPs in Ghana are the least paid – Murtala

Teachers express shock over how kids in primary schools are proposing...