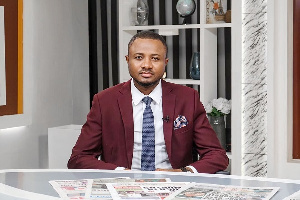 Security analyst, Adib Saani, has expressed his disapproval over the appointment of an acting Inspector General of Police (IGP) rather than a substantive police chief straight away.

He opined that doing so creates room for “unnecessary lobbying” and also likely to divert the attention of officers from their core mandate of policing since all the Commissioners are qualified to hold the position.

See also  This is 'almost anarchy'; is that how weak we are as a state?

“I have serious misgivings about acting (role). Because any one of them, any one of the commissioners can be an IGP, if you don’t confirm there is always room for bickering, unnecessary lobbying, which takes their attention from the core duty of policing,” he reasoned.

He added there is also the tendency for an acting IGP to fall for the dictates of politicians, likening the officer in an acting capacity as IGP, to one that has been taken hostage.

“Besides, the acting IGP might also want to succumb to the whims and caprices of politicians in order to be confirmed. So even as acting, he has virtually been taken as hostage,” Adib argued.

The security analyst therefore called for either the immediate confirmation of COP Dr. Dampare Akuffo George Dampare as the IGP or a different person be appointed in a substantive capacity as soon as possible.

He made these comments Wednesday evening, July 21, 2021, on GBC’s Behind the News program monitored by GhanaWeb in reaction to the appointment of Dr. George Dampare as the acting IGP effective August 1.

Adib Saani meanwhile hailed the choice of COP Dr. George Dampare by the president, revealing that his sources from the policing fraternity, puts COP Dr. Dampare as the number two choice, second only to COP Nathan Kofi Boakye, for the portfolio of the IGP among majority of police officers.

He said COP Dampare brings to bear a lot of experience from the many important departments he led within the Police Service ranging from welfare, finance to operations.

2021Census: Respect And Capture Us By Name – Fulanis | Politics