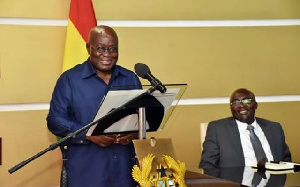 A communication team member of the governing New Patriotic Party (NPP), Solomon Kusi Appiah, says Ghanaians must forgive President Akufo-Addo and his Vice President Dr. Mahamudu Bawumia and other appointees who attended the funeral of late Sir John over the COVID-19 protocol breaches.

He admitted that the safety protocols were breached but it was not intentional, hence the public must forgive the leaders who were present at the funeral.

President Akufo-Addo is currently under pressure to apologize because he has been accused of supervising the breach of the restrictions on funerals and social distancing at the funeral.

The Ghana Medical Association (GMA) has called for a probe and prosecution of the organizers of the funeral.

“We call on the law enforcement agencies to investigate and deal with organizers of this and any similar events to serve as a deterrent to others who intend to endanger the public health of our nation,” part of the statement read.

Scores of mourners throng the Sakora Wonoo Junior High School in the Kwabre East District of the Ashanti Region, to pay their last respect to the late NPP stalwart.

Reacting to this, Solomon Kusi Appiah said the crowd that mobbed the Vice President and those who participated in the funeral were there to appreciate the good works of the current government.

He argued because the personalities were public officials, the crowd that stormed the funeral was definitely going to happen.

“Ghanaians should forgive us. This is not going to happen again. The Covid-19 is still with us, and for us to defeat it, we have to avoid mass gatherings. We are appealing to Ghanaians to forgive us. It will not happen again. To every rule, there is an exception, but we are sorry,” he said on Frontline on Rainbow Radio 87.5Fm.

Read, educate yourself on the RTI law and ask questions – Sulemana Briamah to Journalists