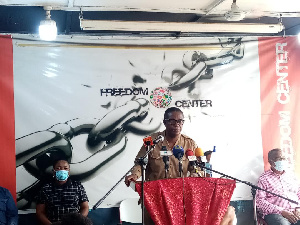 The Socialist Forum of Ghana (SFG) is considering transition into a “Movement”-The Socialist Movement of Ghana.

This is due to its increased membership and scope of operations, leaders of the Forum announced at a press conference on Tuesday.

The transition is expected to offer members a wider platform and scope to champion the course of social development advocacy.

Mr Kwesi Pratt, General Secretary of the Forum said, “We have decided to move to a new platform for socialist transformation, thus a larger, more diverse and more pro-activist organisation”.

He said they would adopt the change in their upcoming congress where members would review previous work and adopt new formal and operating structures.

“We expect that the congress will approve a transition from a forum to a movement and a programme to mobilise working Ghanaians to transform the society,” he added.

Mr Pratt said the Forum was committed to advancing policy alternatives to improve the well-being of Ghanaians.

He said it was inviting members of the public and political parties to come on-board to champion national development discourse.

Mr Prat noted that SFG had over the years advanced the course of national development by mobilising like-minded social groupings at the centre of national decision-making.

The first congress of the Socialist Movement of Ghana will take place from Friday, July 30, 2021 to Sunday, August 1, 2021 at Winneba, Central Region.

The congress will work in six commissions focused on national, international, gender and youth affairs as well as the new constitution of the Movement.

It will also elect national officers for the next four years.

Halt any plans for community mining in Mmampehia and Kwabre –...

Noise Over Composition of Akufo-Addo’s Cabinet “Much Ado About Nothing” –...

Koku Anyidoho reveals what Rawlings did on Mills’ grave before his...