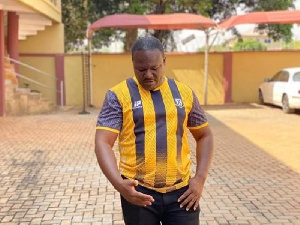 The ‘Support Bofo’ campaign dubbed “Operation Bofo Beba 2021” seeks to mobilize funds and galvanize support to help motivate players and the staff of the team in their last two games of the Division One, Zone One league.

In an interview with the Ghana News Agency on Friday in Sunyani, Mr. Antwi who is the Founder and CEO of Sunyani-based Suncity FM Radio was optimistic that having a team from Sunyani playing the Ghana Premier League would boost all categories of businesses and improve the economic activities of not only Sunyani but the entire Bono, Bono East and Ahafo Regions.

Bofoakwa Tano, after 27 games played is leading the Division One, Zone One league table with 58 points whereas the biggest competitor Real Tamale United have 53 points at the second position.

See also  Pokuase interchange to be opened in July

“Bofo is almost there and we must push them to finish hard so that Sunyani would have a premier league club to contribute to the holistic development of our region”, Mr. Antwi said.

“Everyone knows I am a die-hard supporter of BA United, and I do not usually support activities of Bofoakwa Tano, but, Sunyani deserves Premier League action and it is time to support our own and time to fight for what is ours”, Mr. Antwi stated.

“For the first time in my life, I’ll lead a campaign to galvanize support for my bitterest rivals, Bofo, I, therefore, call on all sons and daughters of our ‘city’ (Sunyani) and region (Bono) to join this campaign and donate generously towards the project”.

He appealed to contributors to contact 0244021908 for their donations.